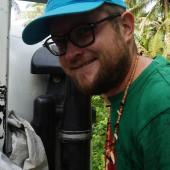 Since 2018, I am an Assistant Professor at the Centre for Media Studies and Journalism, University of Groningen. I have also taught at the University of British Columbia (Kelowna) and was a postdoctoral fellow at the Centre de Recherche et de Documentation sur l’Océanie (CREDO) in Marseille. I received my PhD in March 2017 through a joint/cotutelle programme in Social and Cultural Analysis from Concordia University, Montreal, and in Social Anthropology and Ethnology, from École des Hautes Études en Sciences Sociales, Paris.
My research combines anthropologies of technologies and material culture with indigenous studies. It is driven by a desire to understand how people living on the margins of global capital negotiate places of their own in a rapidly digitizing world. This quest began during my doctoral fieldwork among the Lau-speakers of Malaita Province, Solomon Islands (February 2014-February 2015). Here I completed the first in-depth study on the shifting moralities of smartphones in the indigenous, postcolonial media ecologies of the Pacific Islands.
I have discussed these power tensions and sociocultural frictions through changes in visual and popular cultures in terms of film (Visual Anthropology, 2018) and music (Cultural Anthropology, Oxford University Press, 2018) as well as through broader digitally mediated transformations across Melanesia (Melanesian World, Routledge, 2019). I have also examined how digital technologies and media have become integrated into reciprocal gift-giving within contexts of circular labour migration and urban diasporas (Digital Cultures & Society, 2017) and how they are situated in non-digital, “traditional” communicative ecologies (Oceania, 2017). My most recent projects consider the role of cultural brokers in Solomon Islands Internet, while the other develops an ethnography of deletion based on an examination of digital photography and memory in the tropical media ecology of the Pacific.
Loading Comments...
Comment
×